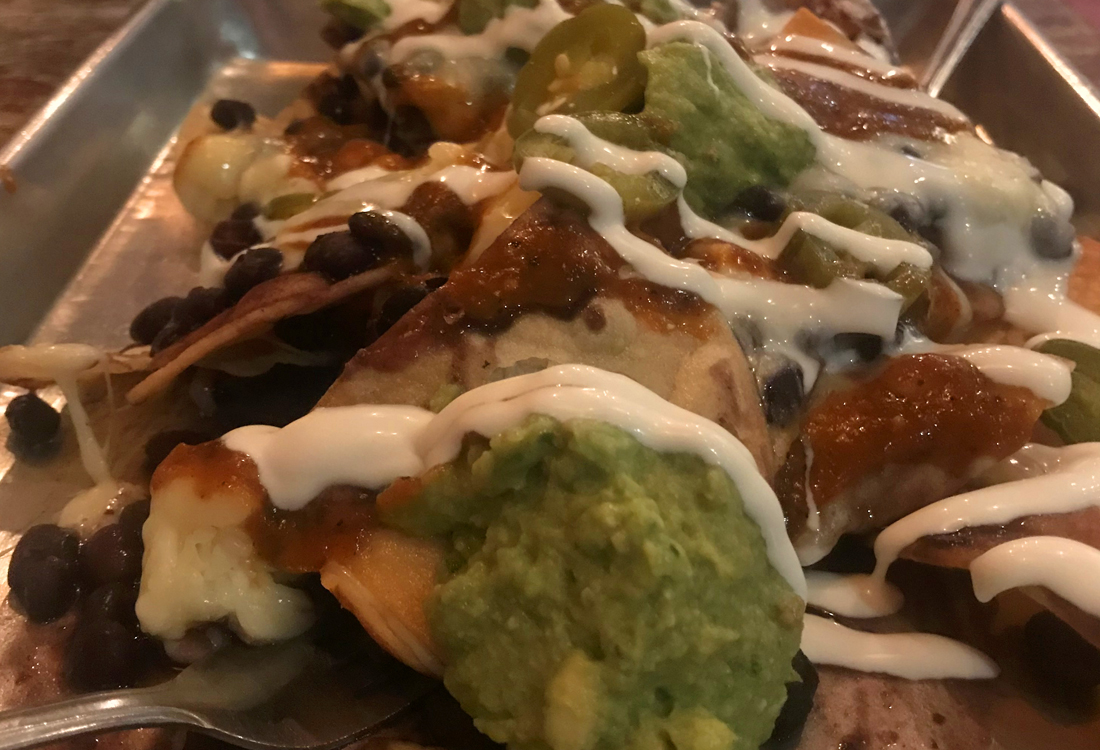 This establishment has long sat very close to the top of the recommended nachos destinations in NYC. I had visited once before on a distracting date and barely noticed whether I was eating corn chips or liverwurst ice cream. So this time around, I dragged my handsome and esteemed nachos brother to make a more informed consensus on this noble establishment’s signature dish. We visited the 9th Ave location, as this humble East Village hole-in-the-wall has seen fit to expand.

Lacking the charm and hustle stained grime of the original location, it was instead replaced with an almost Hanna-Barbara type log cabin feel. Anyway. We were there to eat nachos not review the interior decoration.

We ordered without any of the proffered toppings. We like to keep things simple. One doesn’t judge a bourbon from a “bourbon and coke” does one? They arrived in record time, less than 5 minutes from ordering. Pushing aside our very tasty margaritas we got stuck in. Firstly, magnificent chips. Possibly the best Ive ever had. Superb weight and crunch, a delightful utensil to scoop up the guacamole which was also top notch. There was no sour cream, rather a Mexican crema drizzled strategically across the plate. Lots of beans in a warmly satisfying sauce. Cheese melted through. Really nothing to complain about. Every box was ticked quite heartily.

Yet something felt amiss, a strange dissatisfaction crept in as we finished the plate. Firstly, the meal was just warm. Served platter style it hadn’t been baked long, perhaps a broiler was used, but the cheese was just melted, there was no charred chips or crispy cheese and, most importantly, it lacked that hot chip feel that is often so exciting. The beans. Ok, they did a good job of the beans, but they did leave a lot of saucy liquid which I didn’t enjoy a lot as in these cases it kind of washes the cheese off the chips into a slurry. No sour cream. I like sour cream with nachos. It has a wonderful relationship with guacamole. And there was no salsa. So that delightful intermittent tang it provides to break up saltiness and cheesiness was lacking. There, I’ve made negative comments about this revered dish. But that’s how both of us felt. Complete agreement.

We then ordered the al pastor version. This was a far more enjoyable dish, but that was because damn, that pork was absolutely wonderful and rich and crispy and mouth-feastalicious. But we are there for the nachos and ultimately it didn’t make any difference to how we felt about the nachos themselves. Nice try Diana, but we are not easily fooled!

In summary. In some ways its hard to be too critical. Certainly the dish they were aiming to serve was prepared to the best of their ability and perhaps many will disagree with our stand on the finer points that disappointed the Nachos Brothers. At Taqueria Diana, this is how they believe nachos should be and they do a nice job at realizing that vision. Go eat it. It’s a quality meal. But the lukewarm meal temperature, lack of sour cream, and salsa kind of knocked a couple of points off for us. It’s just how us Nachos Brothers roll.