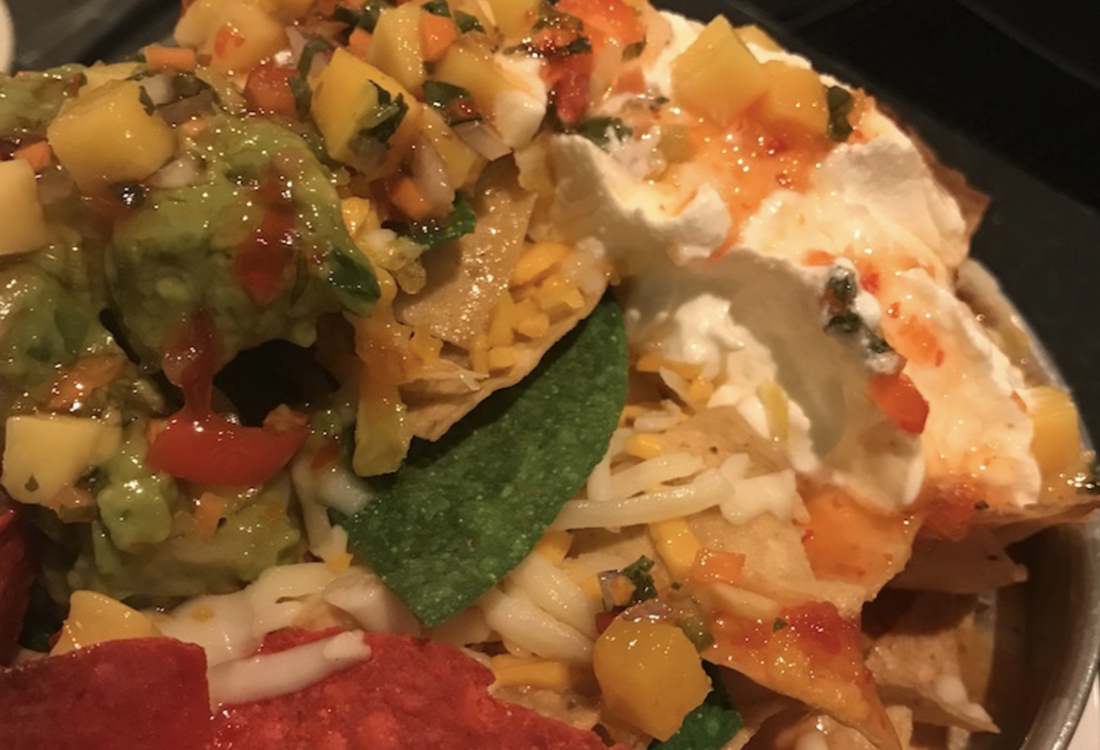 I’ve often wondered when a death row inmate eats their last meal what the feeling would be like when they take their first bite and it tastes like dog shit. The final time to experience the wonder and pleasure of their favorite meal before 2,200 volts horsefucks their nervous system — and it’s the absolute worst version they’ve ever had.

Well, that’s what it was like eating nachos at Liberty Bar.

The list of aggrieved miscues started before bite one. The plate featured multicolored chips that were obviously store bought and tasted like it was flavored with crayons that were found on the floor of an Applebee’s. Slathered heavily on top the frowning rainbow of chips was an odd assembly of toppings that while vibrant in appearance were received as well as a clown’s burp in a church elevator. Guacamole from a can, ice-cold sour cream, and a mango salsa experiment all elicited preemptive boos from our digestive tracts. My partner quickly noted that the mango salsa looked like a cocker spaniel threw up a 9-year-old’s birthday cake. After one taste I think he got the animal correct but the source of ejection was a little more south. The palate punishing continued as the guac and sour cream were afterthoughts in both preparation and placement, crafted with the vacant care of a hammock maker with positional vertigo and plopped on the plate at a distance apart that would suggest a social statement was being made about the merits of segregation.

Worst part of this offering would soon be unveiled. Under the first layer of chips laid the most egregious, unpardonable offense one can commit in the making of our beloved dish: uncooked cheese. Not a few strands, mind you. But handfuls of shredded cheese lying in a cold death like a tomb of ice mummies. How does this happen?

“Hey Chef Chris! You want me to put these nachos in the oven?”

“Don’t be stupid, Lorenzo! That will melt all the cheese, boy! Now ice down some sour cream and throw it on top lickety-split!”

A civilized person would simple ball up their napkin and ask for the check. The Nachos Brothers are such people, yet thoughts of whizzing this plate towards the kitchen in disgust then pulling down our pants and running laps around the bar while bellowing obscure Scorpions songs was heavily considered. But it was wisely decided this place was too good for entertainment of that high caliber.

The Liberty nachos could be the perfect death row last meal, as the plate captured perfectly the flavor of regret piled high with despair, a litany of unheard apologies echoing listlessly between the lukewarm chips, and a crunchy and cold representation of all the bleak futility of a sad life spent on death row. We left with a good tequila buzz and a bad taste in our mouths. But at the very least, it wouldn’t be our last meal or plate of nachos.