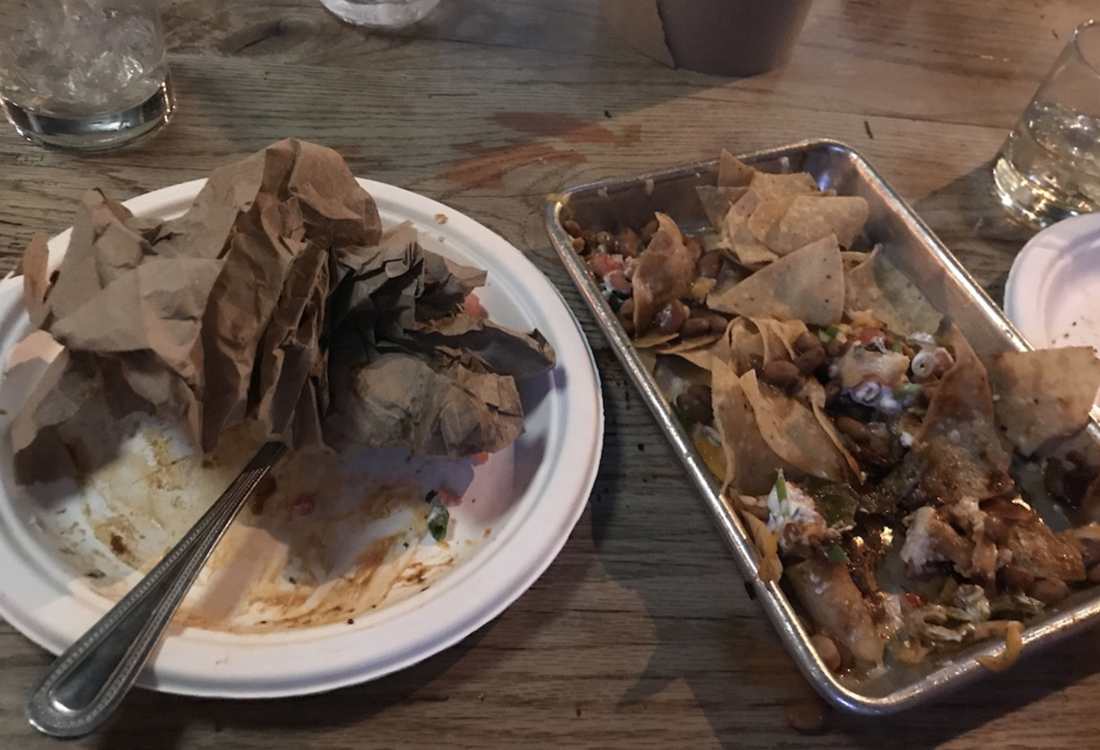 I often wonder what causes more frustration: hard-headed children or shitty-made nachos. On Saturday I got a dose of both via my child who left her library book on the bus after twice being reminded to put it in her bag and a trip to Morgan’s BBQ. This happened in a span of an hour and I can say without hesitation that even if the order was reversed, the nachos at Morgan’s would have still caused the greater vexation.

My nachos hermano and I sat at the bar and quickly ordered tequilas and rye along with a plate of Morgan’s “Brisket Nachos.” We were informed that it was half off all appetizers by the highly enthused bartender (my guess is that he also works at T.G.I.F.s or as birthday party clown known for his giggling pants). Great sign, right? Well, there were 5 people in the restaurant, 15 workers in the kitchen, and we still had to wait 45 minutes for the nachos to arrive. Apparently half-off off the price means double the wait. Not a good sign.

A quick personal note: I’ve never met an adult named Morgan who could deliver on a promise. They tend to be the nail that punctures the tire of every activity, being the root cause of all the good time air ssssss-ing out. And after our nachos finally arrived, that belief will continue unchallenged. While a handsome looking plate of nachos on first look, we noticed that there was no guacamole (even though “chips and guacamole” were on the menu) and they used shredded cheddar (while queso was featured in another appetizer). Disgruntled grunts and displeased sighs ping-ponged back and forth between the two of us…and it was just getting started.

Being a BBQ joint, the brisket was easily the best part of this dish. Yet, coating each piece of meat with an abundance of BBQ sauce made it encroach on the other ingredients. A total rook move, both from a nachos and BBQ standpoint. To add fuel to this agitation, store-bought chips were employed, with far too many escaping cheese and left uncoated. Also competing for our irritation were the pinto beans, a murder of them around every corner that rounded out the completely unsatisfying offering. While both of us were very hungry, both of us threw in our napkins and cried “Tío!” leaving almost half the dish behind.

Carrying a ball of frustration is never a good idea, especially when it’s compounded by two different events, Being men who have taken life’s best shots and come out grinning, we didn’t allow this punishing experience to get us down. Brilliance tends to spring when the frowns are the hardest. And within minutes we were standing in line to get some delicious high-end donuts. Agents of exasperation would just have to wait another day to take their next shot at the Nachos Brothers.