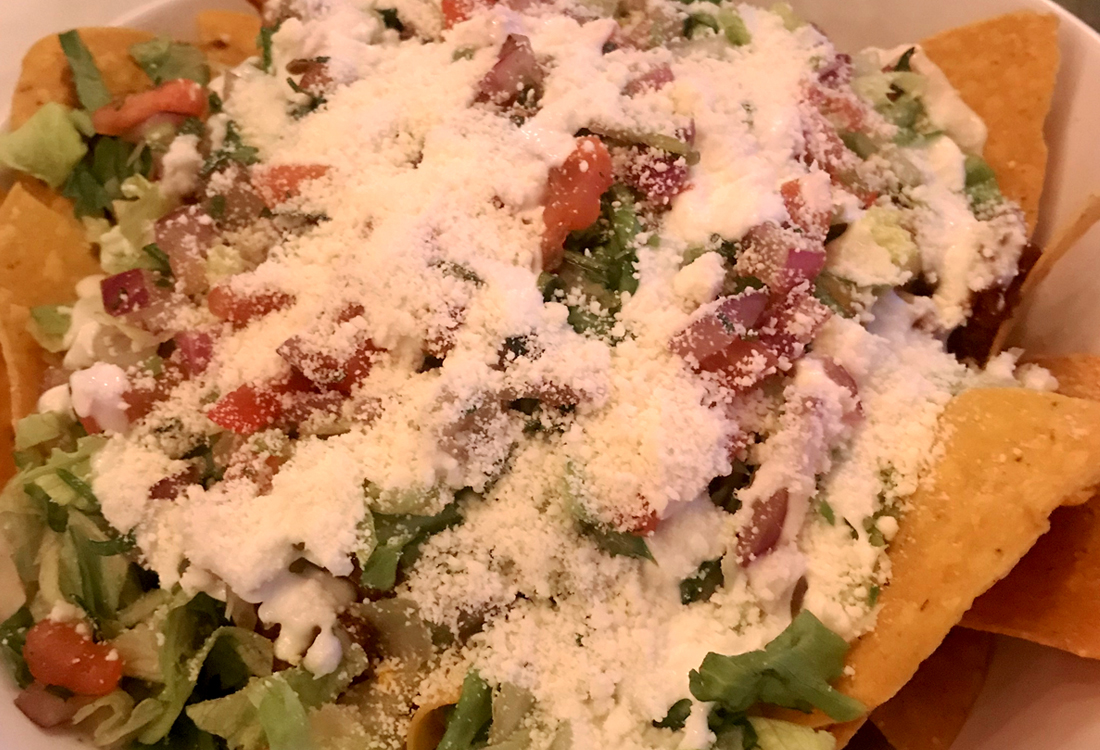 After a five minute walk through the swarms of app designers zig zagging their way miraculously to the York St subway with their eyes glued to their phones, we stepped off the street into this basement Mexican, and were immediately enamored with a decor that transported us to the beach culture of San Diego. Promise filled the air….

There are three nachos choices. The “Pedro” consisted of “plain chips” with toppings, but with no mention of either guacamole or sour cream. This invitation fell flat, rather like a hooker advertising a night of debauchery with no touching and limited looking. I’d also like to point out to the management that the use of the word “plain” anywhere on a menu is inadvisable and also illegal in more sophisticated countries. It’s  close relatives, “ordinary” and “normal’ were already sniggering from behind the frozen margarita machine. Also it may be noted, at the time of publishing there were still no recorded events advertising the Miss Plain pageant anywhere in the world. The second choice seemed mildly more appealing but for reasons probably connected to the consumption of a margarita its contents now escape me. Choice three seemed to be the deluxe version so without further adieu.

The plate of nachos, was actually a bowl. It was a little strange. I’d never seen a bowl of nachos, and the immediate sight of shredded lettuce tangled in the web of beans and chips left me a little deflated. Lettuce is a fine source of many healthy and essential vitamins yet unfortunately when applied to hot food, is akin to holding your meal under a faucet of cold water for a few seconds. Please refrain from doing this. Chips seemed home made but on further thought I don’t believe they were, they were kind of flimsy and cracked too easily and there was definitely not enough cheese.

So how’s this? There was no guacamole. Just some mushed avocado! This unpresuming creamy fruit is held in the highest esteem by sufferers of ageusia [ah-GYOO-zee-a], a condition whereby one cannot taste anything at all, yet for those of us with functioning taste buds, the transformation of this tasteless “fruit” into delicious guac is nothing short of miraculous!  So what fiend of a chef creates nachos with no guacamole??? Perhaps the chefs mortar and pestle was in the repair shop? Then, if so, 86 the nachos, kind sir. Nachos without guacamole is the culinary equivalent of a bride being stood up at the altar. The rest of the meal was just ok, as the chips got a bit soggy, the 5 morsels of chorizo were all found by my eating partner who mumbled a “gnnnrooomvve?” before slamming his empty margarita glass on the bar and elbowing me heartily in the ribs. Honestly, the best part of this was the layer of Mexican cheese powdering the surface, although unfortunately in my scorn I breathed some in, thus sneezing a fine but lethal haze of dairy into the rack of tequilas opposite.

As much as this place seemed to have some decent looking food, it didn’t really feel like the nachos were a high priority. More like a hitchhiker reluctantly picked up in the hope they might put out or at the very least just be good at whistling. Maybe we should have got the “plain” and avoided disappointment.