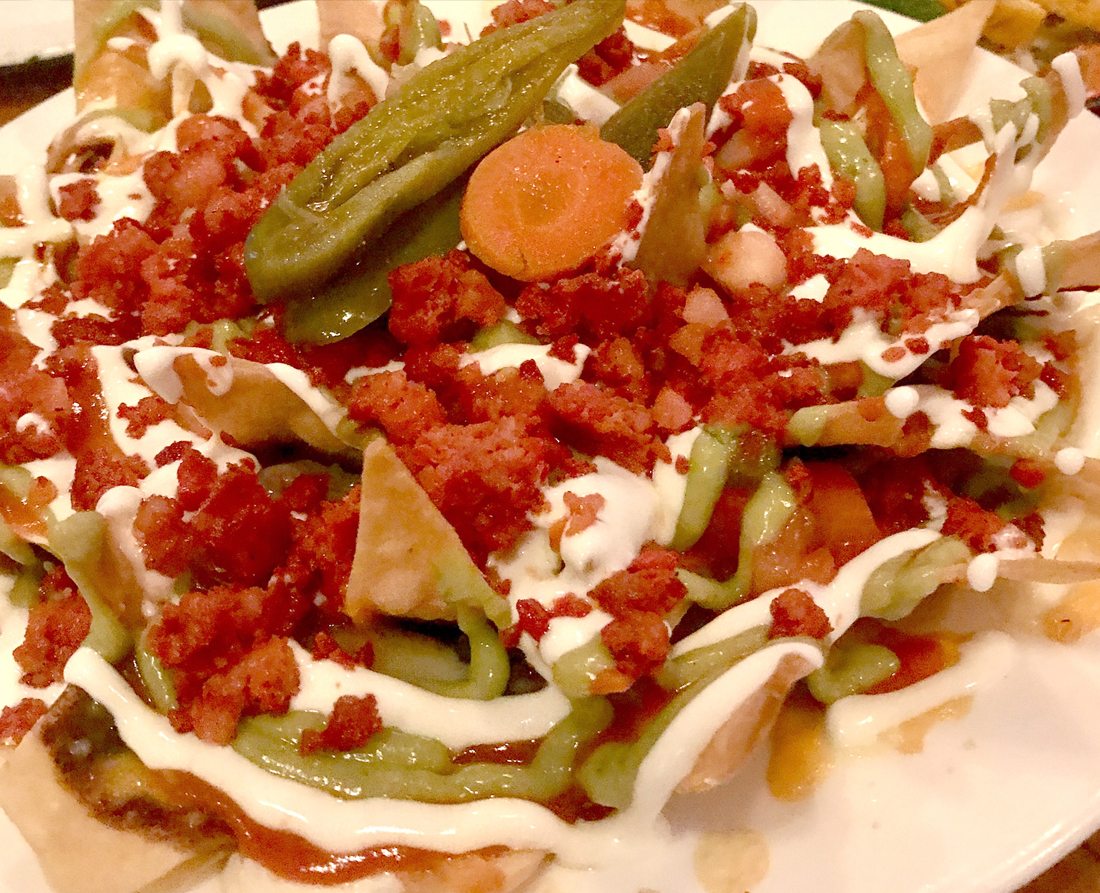 This humble and tiny establishment on the LES oozes Mexicanarama with its cluttered homey south of the border decor and authentic irritating high tempo disco salsa. Hey I’m not here to judge but if they prepared their food in time to the playlist we might not have had to endure what seemed an eternity for our meal to arrive.

We are in our rhythm these days, we sit, order a drink and don’t bother with the menu. My companion is a haughty and flamboyant individual and has been taking to tossing the proffered menu over his shoulder with grinning disgust and yodeling “Nachoooooooos!!!!” Fortunately I’ve had a “conversation” with him about this behavior and threatened him with being banished to the Poké Bowl Bro’s franchise if this continued. We just straight out ordered their nachos and chose the chorizo topping. Then waited 40 minutes, accompanied by an incessant barrage of brass laden falsetto disco salsa, bringing a heightened state of irritation and impatience to a feverish level that only recently castrated eunuchs serving Pina coladas to naked virgins in the King’s harem can  relate to.

The nachos arrive. They are served in a fairly accurate and attractive Fibonacci spiral, hence explaining the extended wait time. They better be worth it. By now the sound track is some poor chipmunk coerced into shouting “tut-arutta”over and over again at 5000 bpm’s until his brain explodes into the open end of a tuba. The chips are delicious. Home made, salty, strong and crunchy. Perhaps a tad small or perhaps my hands had grown due to the music. These things have been known to happen. Each chip has been crafted to have a portion of everything on them, cheese, salsa, guac, beans and chorizo. This is known as Mexican nachos. No idea why. It didn’t come with a sombrero so I’m skeptical. The first few bites are fun.

We are admittedly hungry and scarf along happily in crunchy cheesy bliss. Until it suddenly dawned on us after we slowed down that these nachos are incredibly boring. Each mouthful is identical. And each mouthful is remarkably tasteless. There was just a general lack of joy, a discontent that flooded the mouth. The overall effect was a dull and tiresome experience, with all the flaccid joy of waiting in a hot car in August for your dad to come out of the bank. Each new mouthful soon felt like a tedious chore to empty the plate so the dish-hand had one less thing to do. It’s a truly remarkable effort for chorizo to be flavorless. It had all the spicy exuberance of tofu left in the rain and the refried beans were so bland it was like licking the back of an accountant’s hand. There was guacamole hidden in there I’m sure but it was no doubt dressed for Sunday school in an unappealing light brown suit. Alas. Not our best day.

A mostly disappointing and unsatisfying experience all round. Perhaps less time spent on calculating the advanced algebra for the Fibonacci curve and more time adding some flavor to the toppings.