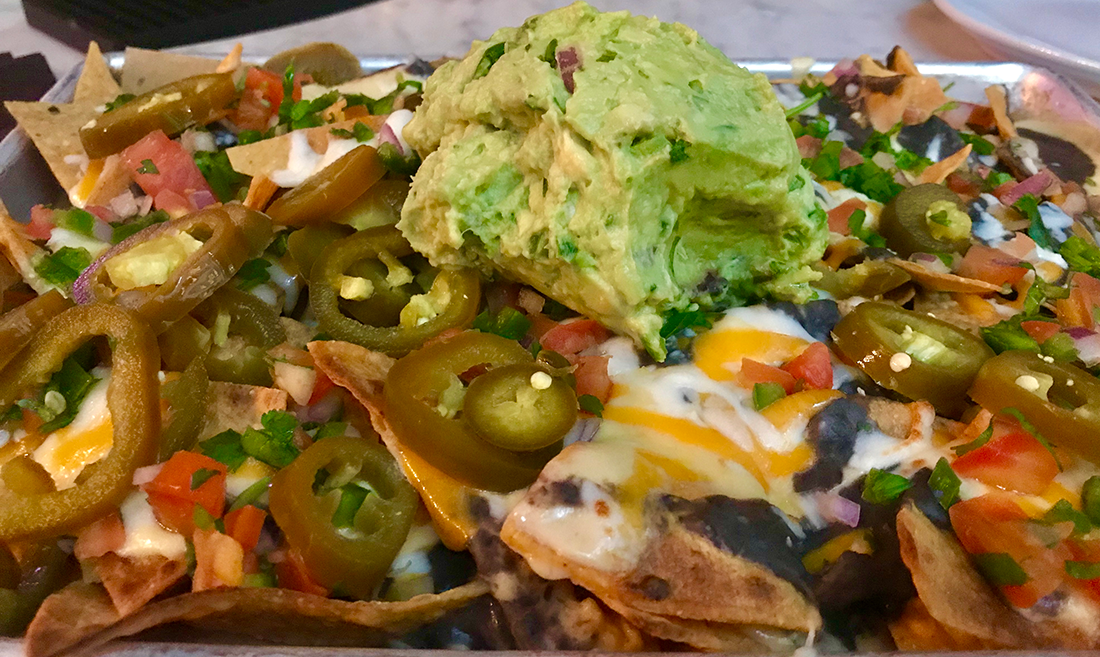 Did Warren Oates carry a wallet or just a wad of bills? Pros and cons of having an office hammock? Name three things tarragon makes better? (and don’t go lazy ass and answer “chicken”!)

These are the pressing questions the Nachos Brothers tackle while waiting for their order of nachos. A telling sign if we’ve struck nachos gold is if this frivolity continues after our cherished dish has been sampled. The first minute features an abundance of chip cracklings, acrobatic scooping, and cheese tension snaps— as well as disturbingly high-pitched ruminative grunts from my dining partner (He denies generating these galling gusts. A third intervention is scheduled for early spring) But after that, if the conversation doesn’t turn to nachos, it’s pretty clear that the offering was not up to snuff.

So when the Ainsworth’s offering of nachos was delivered would we continue guessing each other’s toe lengths in metrics or would the talk be overrun by cheesy chip gushings?

The mini-baking-pan platter served was visually intriguing with good coverage of queso-ish cheese, well-diced pico de gallo, creamed black beans, pickled jalapeños, and a big ball of guac that sat on top. (Sour cream was on the side in cup. It must’ve called the chef “Winston” again). The guacamole wasn’t part of the ingredients listed in the menu, yet we saw that it was listed above with “guacamole and chips” and asked if it could be added. And for once our pushy disposition paid off. The mound of guac was packed with flavor that proudly sold its garlic, lemon, and cilantro freshness. Thankfully the good people at the Ainsworth happily added it at no cost.

Funny enough, this approach of doing the right thing and not what’s best from the start permeated the dish. All the ingredients were done well but there wasn’t anything cohesive that brought it all together to make it remarkable. This was a nachos roll call with everyone reporting for duty, yet acted like it was led by a drill sergeant who didn’t demand excellence and was busy thinking about a second career as a florist. I mean, would you send a nachos troop to battle with store-bought chips?!?

This plate didn’t strive for greatness. Just goodness. And it was all good. Not great. Nor memorable. But mildly enjoyable in a way when your aunt sends you a balloon in the mail for your birthday. It’s nice to blow up a balloon when you’re bored.

The Ainsworth is a nice place with nice people and a nice menu. And a nice plate of nachos. And it was pleasing enough to discuss simple ways these nachos could elevate itself with a few adjustments. And whether a kangaroo has ever carry a koala in its pouch. It’s had to have happened, right?