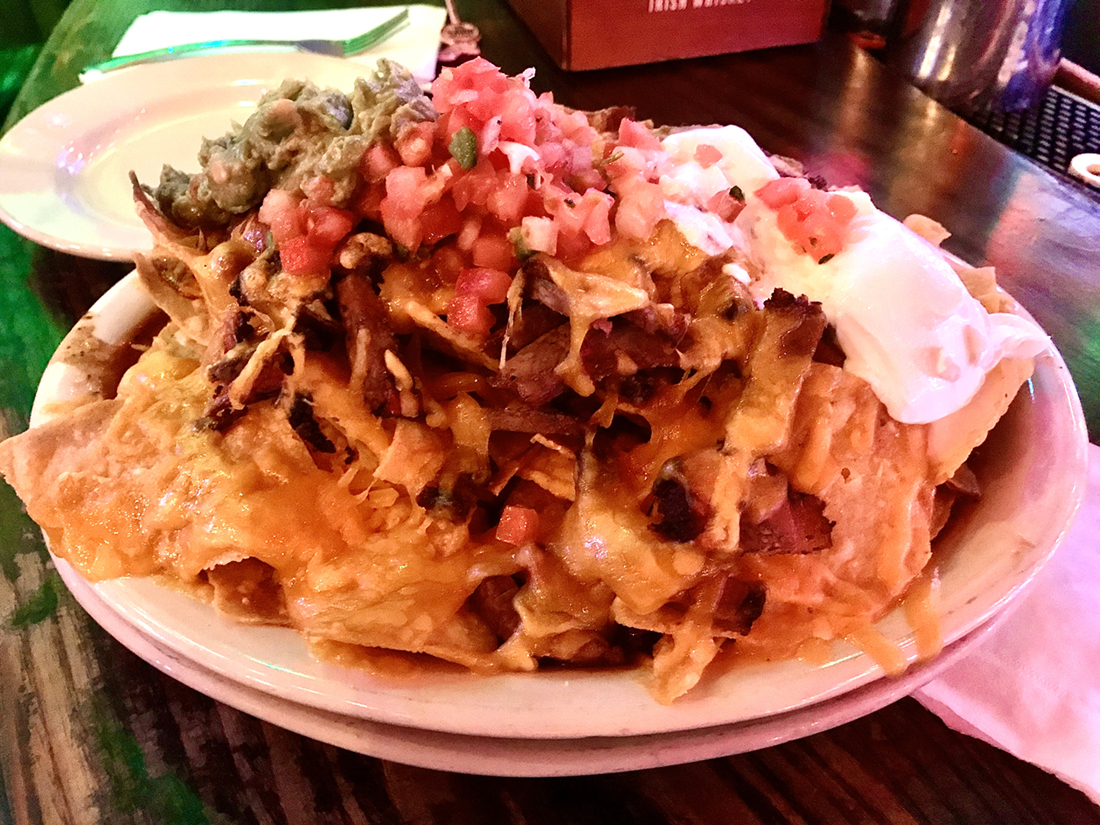 Picture two dashing men trudging through the veils of rain in midtown Manhattan on a Friday night, determined as ever to reach nachos nirvana. Brother Jimmys is your atypical “Bro-town” type restaurant, where the owners probably watched too many re-runs of Road House, hoping to find an atmosphere of tough nut bar room brawl meets 13-year-old girl’s birthday party. They meet somewhere towards the latter, which is probably a more suitable environment for the consumption of nachos.

Not ones to waste time, we hurriedly ordered the “Humongous Nachos” with brisket. One does feel rather foolish ordering anything “humongous” at a restaurant. Rather like a 500lb 2-year-old holding two clumsily crafted wooden forks upside down and bashing the table with his pudgy fists. We sat quietly, amiably listening to some guy named Kevin tell his buddy about a party where he drank a bottle of ketchup with Al Pacino.

Soon, we heard a bell ring down back and the plate of nachos landed with a potent, heavy crash in front of us. Look at these nachos! HUMONGOUS indeed. We examined the proffered meal, steaming, crisp pieces of brisket were wedged into crevices of melted cheesy house-made chips, pico de gallo was tumbling down the side like scattered rubies, and the guac and sour cream sat with a pompous arrogance at its peak. It looked pretty amazing.

Diving in with our usual gusto, the first three or four forays into its hot depths produced a glissando of admiration, compliments tumbling out of my companion’s mouth in an incomprehensible stream of nonsense. We stopped to breathe then began pushing further in. These were seriously packed.The brisket was reasonably tasty, not sauced and with nice edges of chew. But as we delved deeper the cheese seemed to all but disappear and the sudden appearance of a flooded cellar of sweet-as-hell baked beans gave us a moment to pause.

What was happening here? Too many things happening at once, every ingredient screaming at your palate like a mouthful of day traders, the textures and flavors so loud it was like Foghorn Leghorn had been let loose in the kitchen. “Why, why a-looky here, boy. Throw, I say, throw EVERYTHANG in these here nachos licketysplit! EVERY-DANG-THANG!!!!”

We struggled vainly to finish but the whole affair became as futile as whistling “Raining Blood” underwater. The baked beans were just completely overwhelming in their sweetness and seemed to increase in volume the more we tried to eat.

Alas, we threw in the towel, our mouths coated with an unidentified sheen of disappointment and regret. We left soon after, the cold night air a welcoming embrace. Yet, your brave nachos warriors had counted their chickens a little early, the sudden onset of a painful gut and a panicked run into an unnamed bar to use the restroom tarnished the night and left us in no doubt that we would steer well clear of anything HUMONGOUS in the near future.