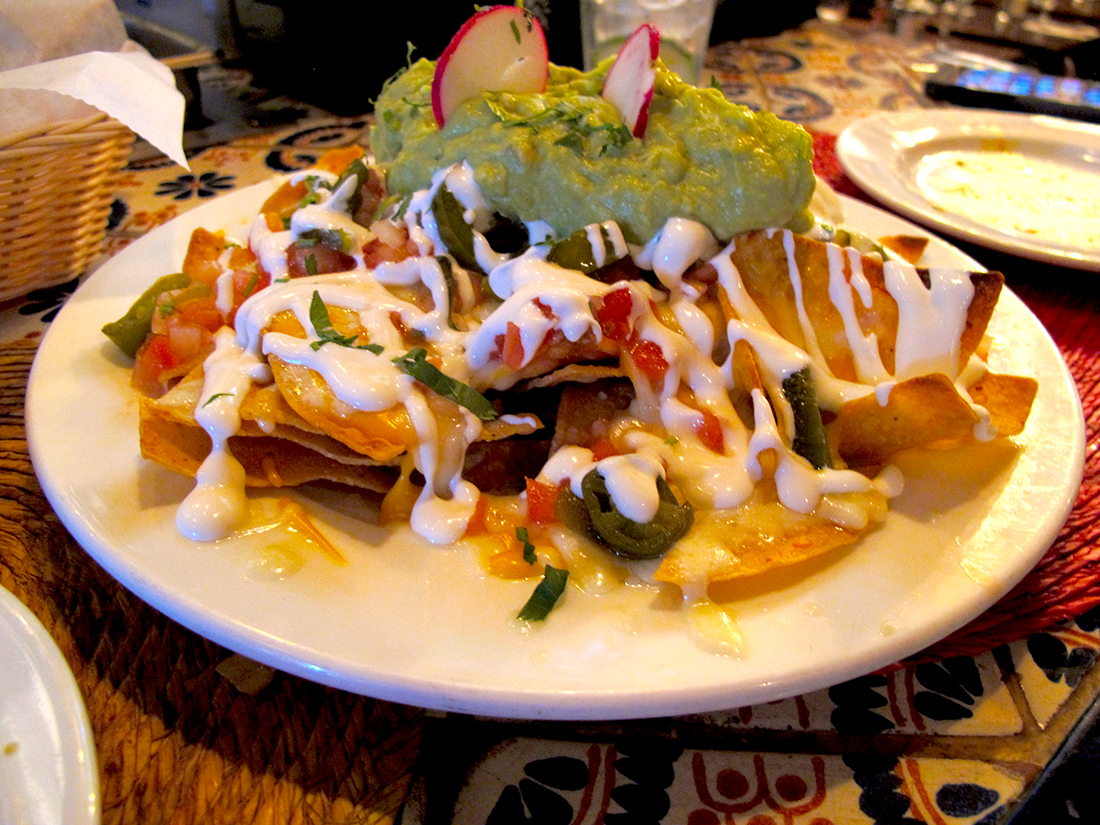 Have you heard about the healing power of nachos? Well, the work day had not been kind to your hunky heroes and we exited with a heavy gloom and weariness as if we had spent five hours in a focus group listening to Coldplay singing their favorite Bavarian lullabies.

But this professional grime would be washed off as soon as The Nachos Brothers walked through the doors of Mole. A cozy, dusky setting with a come-hither amigo vibe made it clear that restoring sour souls was a daily practice. Menus and drinks were procured quickly yet before my eyes had a chance to search for our beloved item, my stool mate blurted out “TINGA!!!” He said this with such thunderous joy that not only did his glasses fall to the ground, one of the soccer players on the TV fell as well, spending the next 10 minutes flopping embarrassingly on the grass (perhaps a coincidence).

After cold compresses had been applied and civility restored, I understood that “tinga” was a nachos topping made up of braised spicy pork and onions. Now I understood my partner’s unhinged excitement. Give us some immedioso! Guacamole was extra but TINGA-MANIA was in full force so money be damned! Yes, good people, The Nachos Brothers were getting their groove back!

In short time a most glorious spectacle was put before us, steaming with rich aromas and chips lovingly smothered end to end. First bite to last rewarded the effort, spicy and creamy, crisp and gooey, savory and tangy sweet. The chips were light and airy yet scoop sturdy with a resounding crunch that rewarded each bite with a perfect hint of salt to carry the toppings. Ample jalapeños provided zesty peppery stings at the perfect time. The pico de gallo was a perfect bright contrast to the hints of lemon and garlic from the delicious guac. The crema provided a luxurious sauce bringing all the elements together. Nothing over the top. This was extremely well balanced nachos with the flavor-beguiling tinga accenting — and not hijacking — its fellow freshly prepared toppings. Like all great nachos, surprising experiences in flavor and texture were found in each grab. And every bite was simply delicious.

In our normal nachos-ventures, at some point the plate becomes saddled with too many plain, “untopped” chips. Not this one! The ample toppings created a cascading river of candied nachos gravy and soon we discovered there was, gulp, not enough chips. This delightful dilemma must happen often at Mole as our server brought over a basket of fresh tortilla chips.

Server: “It’s my job to read your mind.”

They are indeed mind readers at Mole because the cooks know exactly what kind of nachos would put The Nachos Brothers in a state of pure elation. And what happens when that happens, you ask? Another plate of nachos is ordered! We went tinga-less and the plate was just as devastatingly delicious. The elation was almost overwhelming. To wit…

Me: “They put radishes on top.”

Me: “Think it’s put on there as decoration?”

What they serve at Mole aren’t just nachos. Dare we call them “YUMchos”. And a better plate we haven’t devoured. We left with a glow that had people from half a block away giving us jealous stares like they were seeing George Clooney and Brad Pitt wearing jetpacks. And we felt like stars who had a leg up on the world. Not only had we found a cure for work-induced desolation, we had also found the perfect nachos pharmacists to deliver this highly pleasurable medicine.