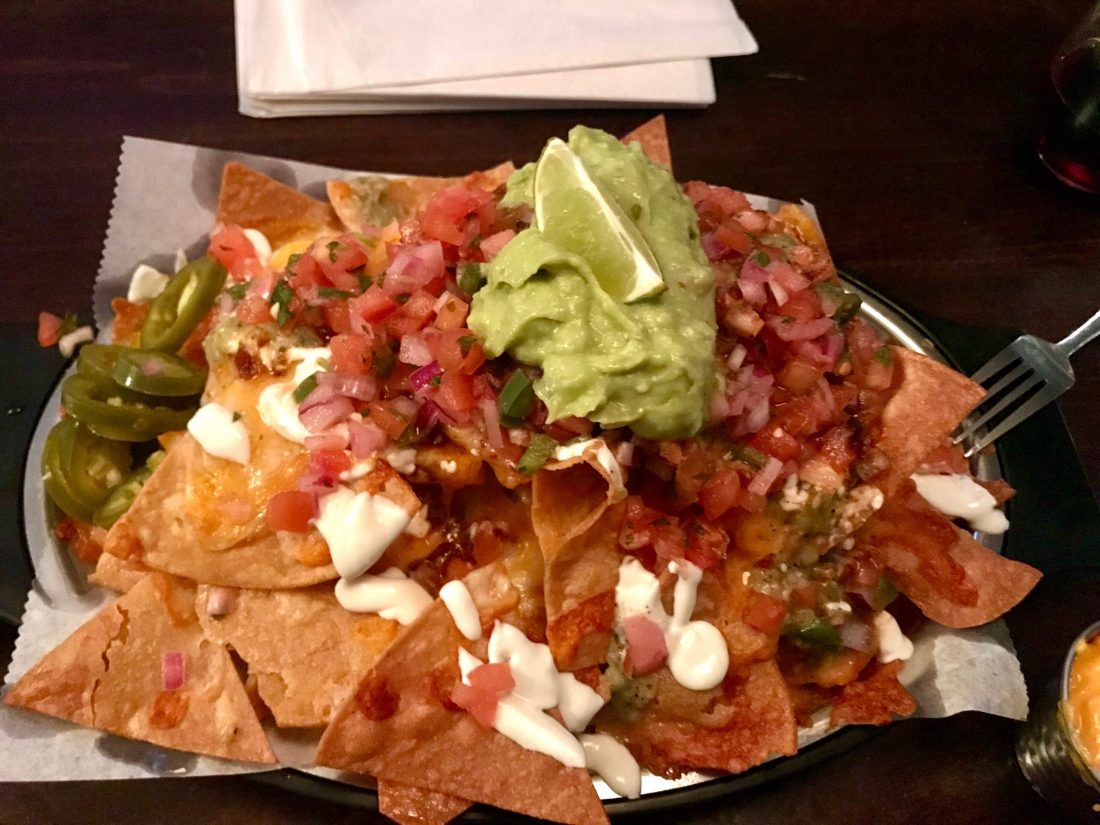 Would it surprise you to learn that the Nachos Brothers weren’t always so discerning about their meals? I agree that picturing anything other than a pair of strikingly woolly sophisticates severely taxes the imagination. But there was indeed a time when we had our days free and rampant gallivanting was undertook with great regularity. And naturally nachos gallivanting — the “Indiana Jones” of gallivanting — was frequent.

Some of our most memorable nachos-vanting sessions was at Professor Thom’s in the East Village. So after a day of soul-squishing office work, the Nachos Brothers decided to visit our old friend. Naturally this reunion produced quite an extraordinarily high level of pep and zing. My partner’s excitement was astounding in its grandness and summited when upon entering the bar he started air bassoon-ing to the Little River Band song “Night Owl” while tipping an imaginary hat to groups of ladies 4 feet tall and under. Luckily only one person complained of retinal flarpmia.

These feverishness produced extreme hunger so we fastlaned it to part of the bar closest to the kitchen. We knew all the tricks of Professor’s menu and ordered the regular nachos with queso on the side. Yes friends and imaginary ex-lovers, we asked for a cheese dipping sauce for our nachos. (All those submitting for a “Genius Grant” can tear up their application.)

Soon our plate came out and the splendor of the offering gave a warm hug to our weary eyes: perfectly baked homemade chips covered with an impressive spread of cheese, a pronounced hat of guac on top, sour cream stretching itself around the perimeter, salsa adeptly splattered across, and a small gathering of fresh jalapeño slices on the sides to bookend this stunning creation.

Digging in with a rumbling ferocity of 100 razorbacks in different phases of neutering, we attacked from all angles. The chips were both thick and crunchy, possessing a self-assuredness that welcomed as much toppings as its possessor desired. I remarked that the Professor makes the best chips for nachos to my companion, who nodded with such force that his eyebrows were reshaped to resemble a regarded Nordic artifact. Cheese was ample and well meaning in its application, yet lacked that thing the Nachos Brothers desire in great amounts: flavorful gooeyness. It wasn’t bland but it was baked on a bit too much, thus many bites were missing that notable cheesy glob, stretch, and tang one expects. But remember, we had queso on the side for that and it was divine. (it’s queso, how can it not?!?) Aggravatingly it was placed in a small condiment tin cup making it difficult for dipping. A saucer or small soup cup would’ve done the job. Yes, nitpicky…yet we brothers of the nachos seek perfection!

The salsa was uber fresh and was backed by an occasional hit of what I think was an enchilada sauce that carried the appropriate amount of kick. The guacamole was abundant in portion but lacked in taste, none of the freshness of the limes, garlic, tomatoes, or onions announcing themselves. My sidekick loves his guacamole packed with zest, so this lack of attention made him swirl his pinkie in the queso tin in a sad counterclockwise motion, which in turn made the bar back burp loudly into an imaginary pocket towel.

At the end of the day, these are fantastic bar nachos. If you’re drinking, these critiques would matter little. Which I do believe was the usual state of the Nachos Brothers in our nachosvanting days. Can’t say we left disappointed because Professor Thom’s still serves a highly worthy platter of our land’s greatest dish. See you on our next bender, Professor!