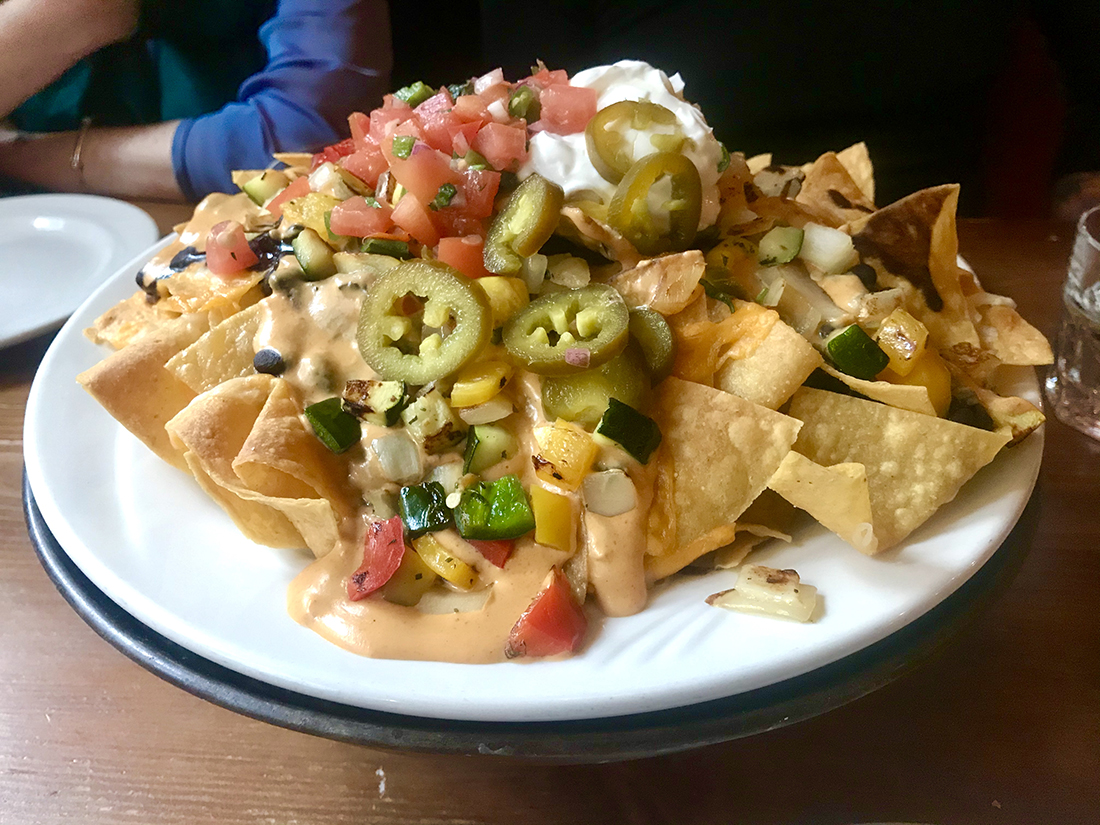 Fresh off the heels of a fairly atrocious nachos experience at The Horny Ram, the Nachos Brothers, with the delightful Riff and Emily still in tow, lurched gracefully out of its mediocre depths onto 2nd Avenue in search of a plate of nachos to rid the horrid taste from our respective palates. After a half a block Riff spotted an establishment with an encouraging name: Barnacho. I mean what are the chances? We felt quite enthusiastic, and heartily agreed that our time at the Ram was merely a bad dream and that we were intended to go to this aptly named bar in the first place.

The interior of Barnacho is classic faux Mexican, which is fine by me, because it sometimes feels like real Mexican is faux Mexican anyway when it comes to interiors. They were even playing the Jimmy Buffet classic “Margaritaville”. It’s like they knew we were coming! We felt soothed and sat at an ample booth with a delightful view of all the scurrying happening along 2nd Ave. We ordered some margaritas — inspired naturally by the soundtrack — and quickly ordered the nachos with no meat. We felt happy and confident that our fortune had taken a new course.

The waiter soon appeared with our nachos like a slow-motion figure from an 80’s movie, laying down this monster serving of ‘chos that sat atop their very own statuesque copper serving bowl-podium. It looked amazing. I quickly texted my parents in excitement, before realizing my mistake. All of us were photographing the platter like true nachosarazzi, as if Robert De Niro had stepped out of a limousine and onto our table. We quickly decided we should eat, in case someone nefarious decided to steal them, so we plowed into their depths. Our excitement immediately hit a wall when we noticed, rather surprisingly that there was no guacamole! What in hell?!? There was ample sour cream and a strange looking pico de gallo, which upon closer inspection proved to be zucchini. Yup. Zucchini. What on earth is zucchini doing on nachos?!? Do I look like I need the fiber? Or vitamins? And it tasted like zucchini, bland and watery with a mushy texture that was so uninspiring that I made a sound probably similar to that of a polar bear receiving a parking ticket.

We sallied forth anyway like the true nachosventurers that we are. All in all, they weren’t utterly terrible. Just disappointing, especially considering the plate’s big entrance. There was no melted cheese, only queso, which is just an uninspiring choice by the chef, I’m afraid. I’m not at the ballpark! I’m at a restaurant! Melt your goddamn cheese and give me those crispy cheese moments, kind sirs and madams! The chips were a decent store-bought variety but atypical mex corn chips, kind of flimsy. They had the oily flavor required, yet there wasn’t much enthusiasm post-crunch. Mostly we were just hungry and enjoying the margaritas, yet the nachos were unfortunately subpar. In the end, Barnachos nachos had too much wrong and not enough right. Much like Robert De Niro’s movie roles since 1992.

It should also be noted that a large leaf of romaine lettuce was laying at the base of these nachos, giving an ironic middle finger salute to us at the end that immediately plummeting the score into the negative.