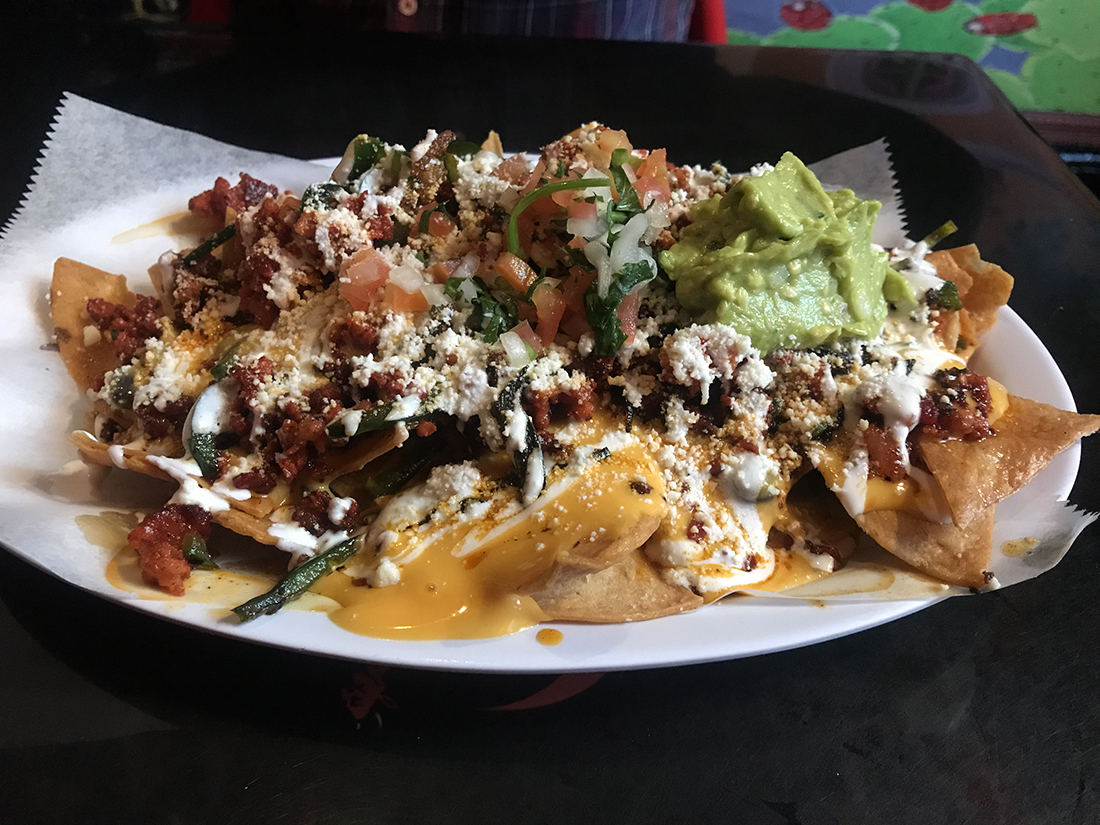 Did you know “nachos” is a popular lyric in mariachi songs? Well it was Friday night! For when the Nachos Brothers ran into a mariachi band on a downtown-bound F train, our minds were so excited for our next adventure that once the musicians started playing, we started spitting some mad ‘chos verse:

It was as electric as you can imagine. Wonderfully perturbed stares mixed with beautiful bursts of apathetic annoyance. One child was so taken he held up a banana peel and with sigh-laden glee. It’s the kind of love you just can’t buy, folks.

This is all to say it was an apt prelude to scarfing down some of this magical dish in the East Village. We entered the narrow confines of El Diablito (roughly translated means “The Angry Battery”) and saw they offered an assortment of nachos. The Nachos Brothers are by day a duo that make many momentous decisions, so we tend to prefer our nachos selection more prescribed. But it was Friday and we had just entertained the bulk of the NYC transit community, so what’s one more thing to do? We ordered their eponymous nachos, along with a mango Jarritos because, well, “The Angry Battery” sounds like something that could be incredibly spicy.

The plate came in a short time and we knew before bite uno that this was a plate good for a Nachos Brother, not Nachos Brothers collective. My partner was so ravenous he initially picked the tiny offering up by both sides and started to tilt towards his feedhole as if to consume it in one nachosnificent gulp. Yet remembering a nightmare that culminated with ascot-wearing pygmies tying him down with discarded tamale husk and queso-boarding him, the plate returned to the table.

Despite its size, there was much to enjoy in this petite plate. Chips were expertly made. Crunchy, perfectly salted, and raring to take on any load. The chorizo was seasoned nicely with a soft kick that came with each chew and mingled well with the other supporting toppings. Sprinkles of cotija cheese, thin slices of poblano peppers, and traces of black bean puree made themselves known in each bite without demanding a spotlight. The salsa and guacamole were both fresh and checked all the tasty boxes one desires. All in all, there was a lot of good flavor going on here and the main components were gone in no time at all.

One thing that wasn’t subtle or shy was the cheese. The queso was enthusiastically ladled over the chips, and maybe, dare I say, with a bit too much vigor. Usually this is a welcome indulgence but only when the cheese presents a pleasurable diversity of taste. This batch was only good. It didn’t have any burst and was missing a MMMMM factor. Better if some shredded cheese were added and baked over the chips. Biggest issue was that after all the chips were gone, an oceanic nachos soup was left to deal with that was resting on, strangely, a paper lining. The ceramic plate didn’t appear an heirloom or from the Howard Hughes Germaphobe Dining Collection. Fortunately, we love cheese in all forms so the rest was slurped up as we contemplated what color fabric would showcase our name best in a quilt. (me: midnight curry, my partner: something called “Alex”)

Our second order was the el pastor and it possessed many of the same highlights and lowlights. Expertly seasoned pork packed a mighty yum yet diced grilled pineapple made both yours truly and my counterpart wince and question the second helping using elaborate thumb signals and nasal grunts. And again we had a nachos soup waiting for us at the end with not a chip to lap it up in sight.

We left satiated but not very satisfied. The former due to the double order and the latter from the frustrating signs of nachos greatness erased by nachos negligence. Regardless, we left with a song in our heart…nachos por favore!