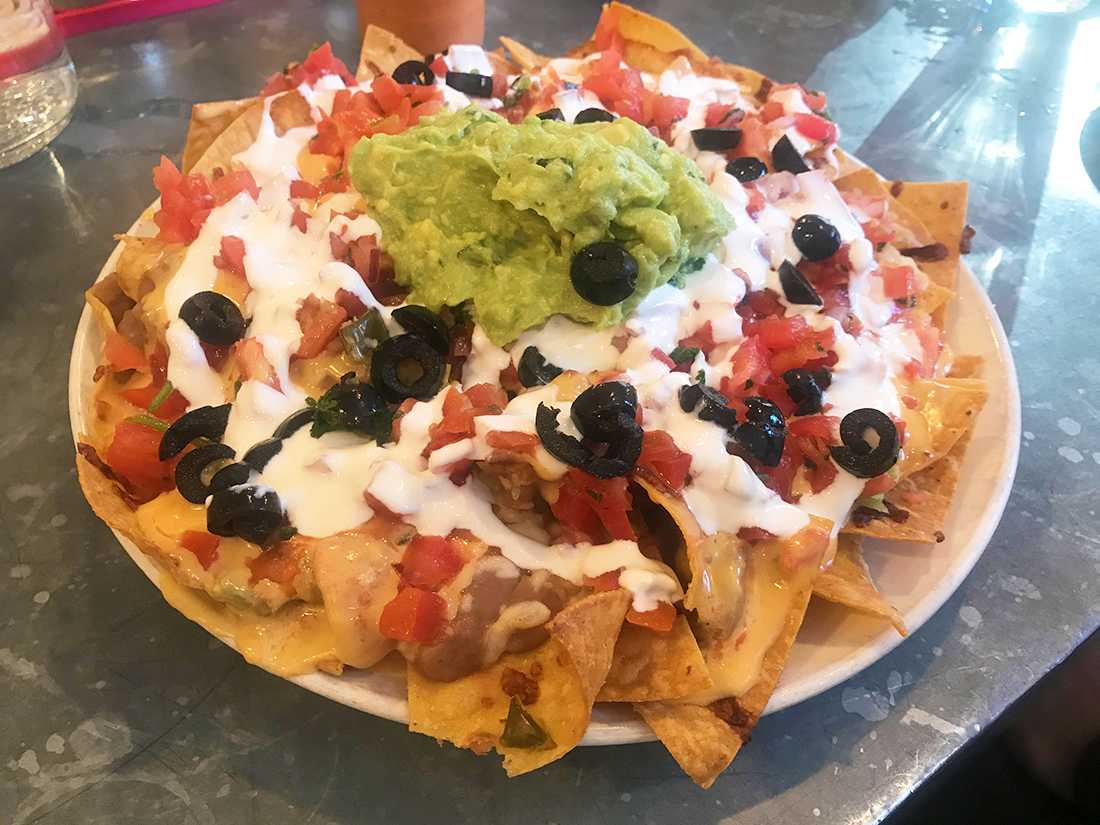 The Nachos Brothers were in a frisky mood. Our respective Saturdays were quickly descending into a maze of menial activities and taint-jabbing chores. But leave it to my quick-thinking, slow-bathing partner to spot an opportunity in all this and text me the perfect remedy: DAYCHOS!!!!

We chose The Commodore in hipster-glazed Williamsburg for our daychos adventure, but they were only serving brunch and aren’t apparently down with the daychos tip. Rather than throwing a fit and start poking holes in everyone’s Wilco shirt, The Nachos Brothers exited with their renowned grace and found a more than adequate substitution about two blocks away at Taco Chulo.

Grabbing a seat at the bar, we reviewed the menu and found our prized dish immediately. Yet, our nachos senses sent us a warning wink about two undesirables found in its description: refried beans and olives. Our appetite and zest for daychos, though, had their hands on the wheel, so we ignored the alert and ordered the most alluring option, “The La Bomba,” which featured both Velveeta and Chihuahua cheeses. This was a daring move, because less than 24 hours past we were wading through a soupy serving of mehso cheese from El Diablito. But The Nachos Brothers are nothing else than legendary nachosventurers, so we sallied forth with an eagerness reminiscent of a young Bruce Jenner trying on his first pair of L’eggs.

When the nachos arrived we could tell immediately that our ordering courage would be heartily rewarded. It was a handsome plate, obviously constructed with supreme care and proficiency. The cheese mix was divine, mixing bold cheesiness of the Velveeta with the mild and slightly sour flavor of the Chihuahua, each luxuriously laying across the crunchy and superbly seasoned chips. The feared olives and refried beans added both briny pop and brawny earthiness that was welcomed mostly because it appeared at the moment when the taste needed a little zag to offset its cheesy zig. Guacamole was a handsome heap of ripe avocados, onions, tomatoes, garlic, lime, and, guess what, a cheeky bit of minced olives. Crema and jalapeños were high-quality second-tier stars added a refreshing pep and tang on cue. And this was a big ol’ heaping of ‘chos, perfectly portioned for two perfectly proportioned lads, as we all know The Nachos Brothers to be.

The La Bomba delivered an expertly cooked and prepared plate of our cherished provision. What prevented it from reaching nachos nirvana was it provided only a little variety of nachosliciousness. There were no unexpected bursts of flavor that elevated the serving beyond the first five bites. We both felt that if the refried beans were replaced with a well-seasoned meat, this plate of nachos would’ve easily hit a higher score…and possibly the highest.

In the end, the Commodore’s preciousness about its brunch served as a harbinger of something more transcendent. And my partner, who has both eaten nachos at The Commodore and worn socks made out of flaxseed, swore Taco Chulo’s offering was clearly better. But you’ll have to hurry to find out if this is true. Taco Chulo will be closing permanently on February 29th. So put on your favorite evening scarf and mongoose-skin eyepatch and run to Williamsburg to sample their magnificent creation before it goes away for good. You can bet your sweet pico-de-gallo ass The Nachos Brothers will!