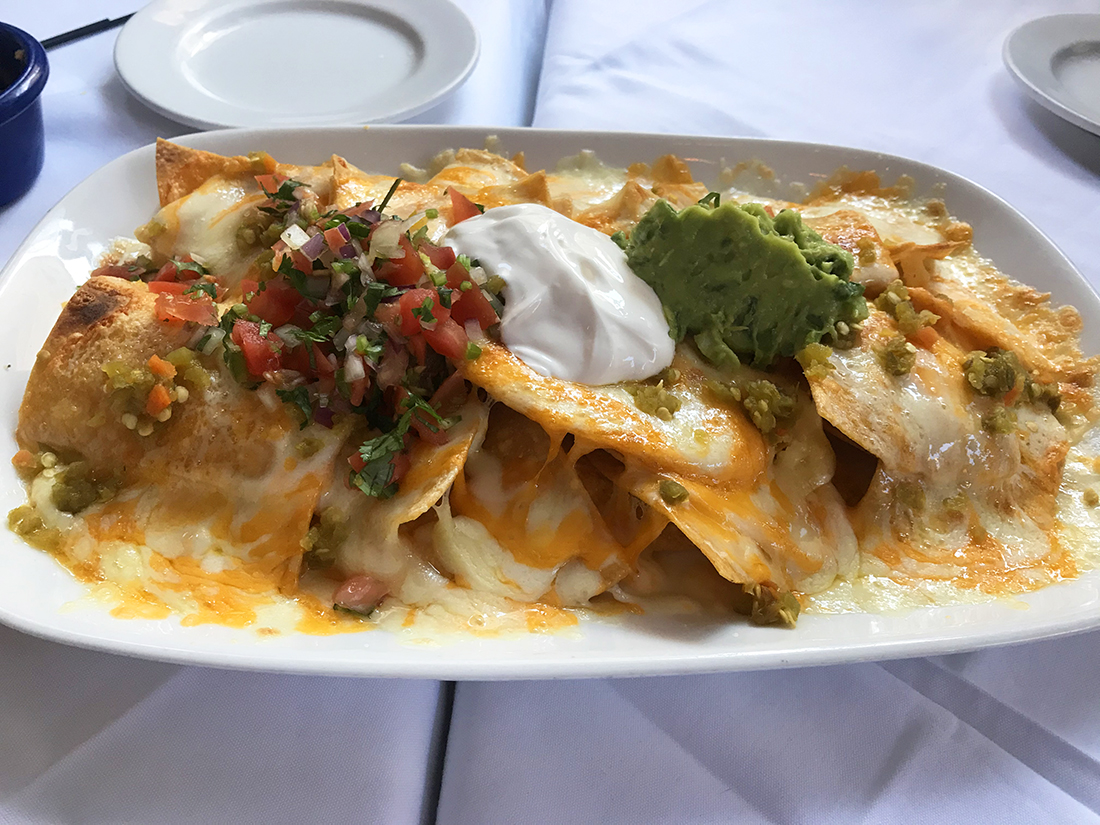 These two stout and starving men were most keen to try the nachos at El Rio Grande after seeing a delightfully composed photo of their dish on the Instagram. We hurtled down 38th street by hoof, barely glancing at each other or even bothering with niceties. At one point our path was barred by two lanky under-dressed fashion stylists discussing sexual innuendos while sauntering at such a leisurely pace my partner was forced to bustle into them with a stern, bassoon-like announcement of “NACHOS”, thus clearing a path onwards to our destination. He is a gifted man.

Artfully disguised as a 65-floor office tower, this Mexican eatery has all the charm of visiting a wealthy aunt in a mausoleum. Starched waiters in bow ties and tight waist coats hovered around feigning anxiety over the moral fiber of their guests, while small groups of trust-fund millennials, having just paid top dollar for a cosmetic lobotomy mumbled inconsequentials into gaudily decorated cocktails.

We were waiting for the esteemed artist Braino (who is going to mastermind the illustration of something special for the Nachos Brothers. Yaypers!), so we ordered margaritas and some guacamole, hoping this included chips. The waiter didn’t mention chips but his disdain left a faint hint of ozone and diapers in the air so we decided not to pursue inquires. The chips did arrive and we waited patiently while our suspicious server sliced and diced 2 fresh avocados up at our table in less than no time and with a flourish and a cold shoulder delivered them to our table.

Anyway, we are here to discuss nachos. They had a variety of nachos but we, as usual, were concerned about ordering meat as is our modus operandi, so we ordered the “Queso Nachos” which from memory advertised the presence of 39 different cheeses. We quietly ordered, careful not to make any sudden moves or faux pas that might offend the waiter. They arrived forthwith, a VERY cheesy pile on a sparkling white 12th century Ming Dynasty porcelain platter. As you can see from the above photo by my gifted Nacho Brother, it truly is a sight to behold! Fingers dancing and delving we pulled lovingly coated chips free of their cheese shackles, marveling at the strands connecting the plate to our eager mouths. The cheese combination was very good. It was apparent that unless you ordered the guac to be made at your table by Hermano Goeringo, you received a micro-dollop of crestfallen green gunk balancing precariously on two chips. Disappointing. And not fresh. The pico de gallo was quite bland and lacking any presence, more like a whimsical whiff of tomato.

There was not much else to the meal. In some ways it was more just chips with melted cheese, whilst a nice enjoyable meal in itself especially as the chips and cheese were top notch, it was almost difficult to make any kind of critique. We just talked, ate, made some seal noises for our own entertainment and scooped up the cheese, because that really all there was to it. In fairness to El Rio Grande, perhaps we should have ordered the chili con carne version, as the lack of toppings certainly made it seem more like something you would make at home.

As tempting as it may be to return and sample the other nachos on offer here, the 4-star-hotel-lobby atmosphere and the starchy service makes this about as likely as the Nachos Brothers starting up a poke bowl franchise in Idaho. The score below is a reflection of the meal we ordered and less about the quality of the nachos they serve. Perhaps one day in a state of curiosity we will don our tuxedos and venture forth here again. Perhaps not…