By Nachos Brothers February 22, 2020 No Comments 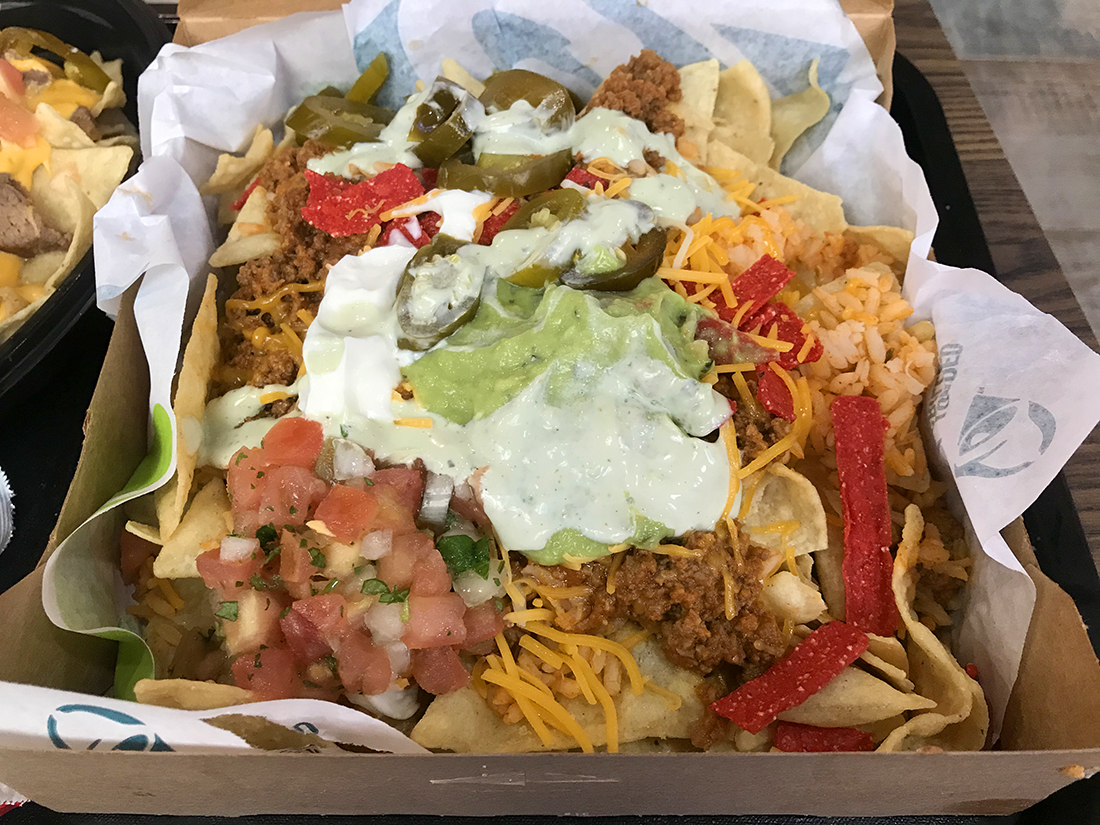 Well, last week the clink of fine china, starchy rustle of white tablecloths, and snooty austere table-side service highlighted our nachos experience at El Rio Grande. This week The Nachos Brothers decided to turn down the volume, untie the shoelaces, loosen the collars, and leave the shaving cream in the cabinet and head to the legendary fast-food emporium, the one and only Taco Bell.

There are three varieties of nachos on the TB Cantina menu. We chose the Nachos Fiesta, sans lettuce. Punching the details into the menu screen felt very sci-fi, I quickly became agitated and wanted to escape the mild bedlam of 16-year-old girls screeching incoherently, the groups of tourists clad in Arctic exploration gear trying to fit their sumo sized clothing into small gaps between tables, and the din of the frantic black clad staff. Curiously, there were around 32 people working behind the counter/open kitchen — and all were exactly the same height. My name was soon called, yet the mono-height order-caller made it sound like a brand of Bolivian sunscreen, thus I failed to notice. My more astute and spatially aware co-pilot made the connection and collected our meal with his usual open-pant-zipper charm.

Upon unlatching the box, we discovered what appeared to be a serving of deconstructed nachos. All the ingredients were there but nothing was cooked. Was this supposed to be cooked at home? Did my Nachbro hit “raw” on the self-serve screen? The heat-spared shredded cheese looked like toxic yellow sprinkles and tasted more like deodorant. A dollop of green goop resembling a camel’s expectorant sat futilely in the corner seeping slowly into a chip. This was assumed to be guacamole. The chips were bland and tasted like someone else’s teeth and were so brittle they broke when looked at. They had all the textural pleasure of autumn leaves. To round out this tribute to outhouses, the ground beef looked like a cat had used the meal as a litter box, and like everything else it was cold and flavorless.

It was a depression-rich journey, I must say. Each attempted scoop of these nachos was like eating uncooked lasagne off a subway platform, the sauces tasted like asbestos and there was rice scattered throughout, which actually seemed to absorb whatever flavor there was, into their unforgiving husks. Soon the meal needed to be eaten with sporks, the chips after 5 minutes now were more resembling confetti from a same sex marriage at Guantanamo Bay and the assorted sauces and ground beef had formed a slurry that could easily have been mistaken as some kind of toxic effluent. We wisely decided to push the box aside and stared at each other in a foreboding silence, the cloud of regret between us being slowly absorbed by the dust cloud of chips which was slowly floating towards the men’s restroom where Im sure it quietly flushed itself down the toilet with a silent apology.

Unfortunately this tale of abject culinary displeasure doesn’t end here. The next morning, the Taco Fiesta decided to unleash its wrecking ball of mediocrity on my intestinal tract, where it had the effect of lighting a roman candle in a crowded elevator, everyone running for their lives screaming in pure horror.

Some nachos are kind of like the nachos you make at home, we’ve said it a few times. These nachos are what you might make in Romanian prison, crushing peeled paint into a paste with your cellmates saliva to make chips, melting days old cheese with a zippo lighter held by a shaking hand over the toilet, while the futile decay of your existence burns slowly in your soul.