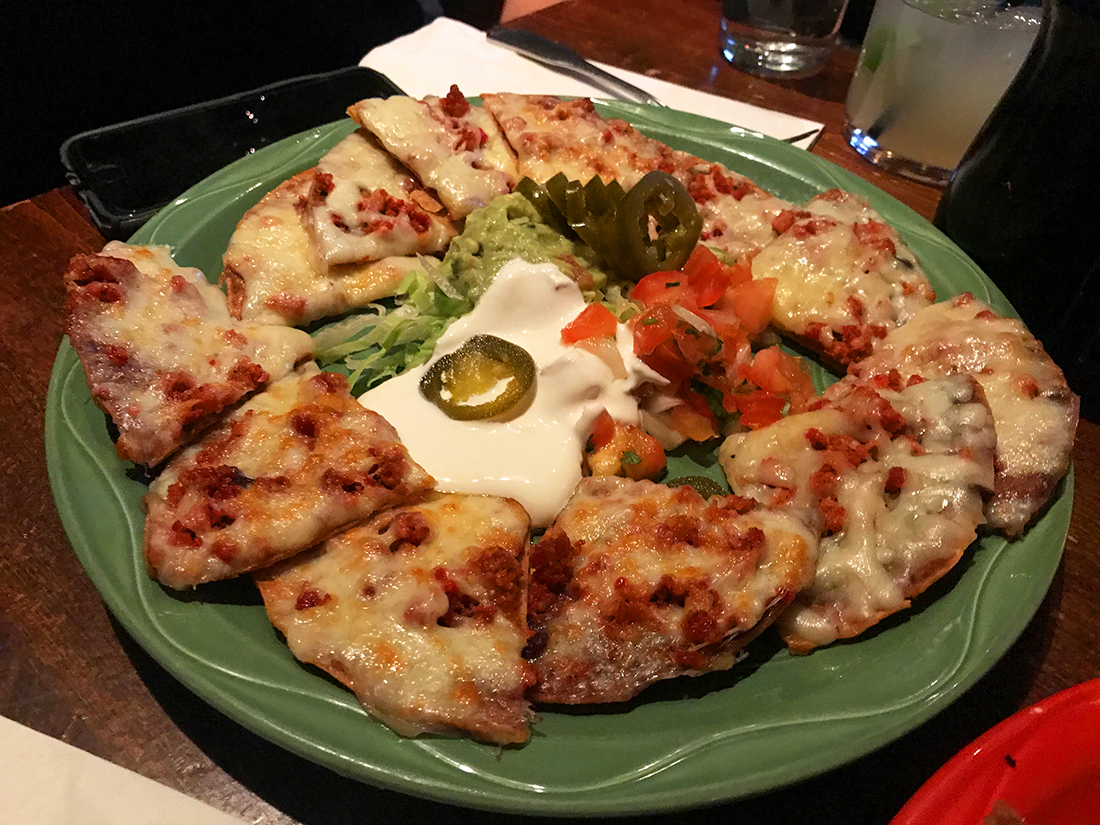 The Brothers el Nachos had just experienced a profoundly mediocre experience at Mulligans Vomitorium and stood outside huddled in the rain on Madison Ave pondering our options. I hadn’t eaten a real meal in some time, mostly because of foolishly trying a Hindu fast, where all I ate was raw scallions and some napkins for five days. But we had reason to believe Mad Dog and Beans, a Mexican cantina I had seen many times on a sandwich-boarded-human-advertising receptacle, was nearby.

We entered to find a gigantic space filled with a teeming mass of female customers all gurgling away on bucket-sized margaritas and screaming “The Nachos Brothers!!!!” Or that’s what we heard anyway. We saluted their enthusiasm with our renown waving eyebrows. The nachos served at this rambunctious joint are “Mexican style”, where individual chips are prepared with the toppings and laid out in a circle. I usually despise this option. I don’t even know why Mexico wants to own this version of THE supreme dish. But surely this can’t be worse than the charnel house nachos we were already having trouble digesting. The kind and enthusiastic waitress came over and greeted us with such a resounding “The Nachos Brothers!!!!”, I got up and gave her a hug and an autograph, while my less delirious partner kicked me hard under the table and grinned apologetically in her direction. She informed us that a plate of nachos was 12 chips, singly dressed. It sounded more like what happens backstage in The Rockettes dressing room, but we decided we needed to order two servings because 12 chips sounded kind of sparse for such nachos gargantuan as us. We ordered the chorizo and the beef.

As you can see from the photo, they are indeed presented in a circle. All the chips were well covered in cheese and meat, and very nicely cooked, just to the point of crisp but staying gooey underneath. Fabulous! The guac, pico de gallo, and the sour cream were all residing in the middle of the plate, awaiting their turn to dress the chips. This was slightly annoying as we just really like plowing into nachos with an abandon that makes the ceiling shake and my pants expand. To hinder the process the ever-evil shredded lettuce was woven onto the toppings, rendering the construction of each bite mildly annoying as shredded lettuce, apart from having all the flavor of wet air, also tends to tangle the toppings into a weird slimy inconsiderate mess. Lettuce is the boring cousin your parents make you take to your best friend’s house in the summer holidays. They lay on the floor asking stupid questions, pick their nose, and eat all the hot dogs before usually kicking the dog for no apparent reason. Lettuce should stay in the salad bar where its drippy, cold awfulness has its place.

But I digress, the nachos were pretty good. The meat was very tasty and nicely cooked and savory. The chips were fun to eat and went really well with a margarita. But the problem with Mexican nachos soon raised its head. Each mouthful stays the same. They’re boring. There is no variety. You just pick up another cheesy chip with meat and shove it in your mouth. Plus with this style of presentation the chips go cold really quick and soon the cheese had that film on top as they cooled down and it started tasting like we were eating leftovers. Obviously if we had shared one plate this would not have happened, but still, this is just the case with dressed chips.

Plus this whole uniformed circle of nachos is just a bit too formal. Great nachos have an element of chaos. It’s the dichotomy of mess versus pleasure. There is a childish joy to nachos and great nachos makes you yell and throw things in joy, you hoot and bellow and make faces. Cheese should be sliding off your chin while your friends point to sour cream that’s found its way to the back of your neck. You should leave the table with guac on your elbows and broken chips should cascade from your lap. So, as much as these are definitely tasty and well made, the score gets reduced, simply because, well, it’s Mexican nachos.